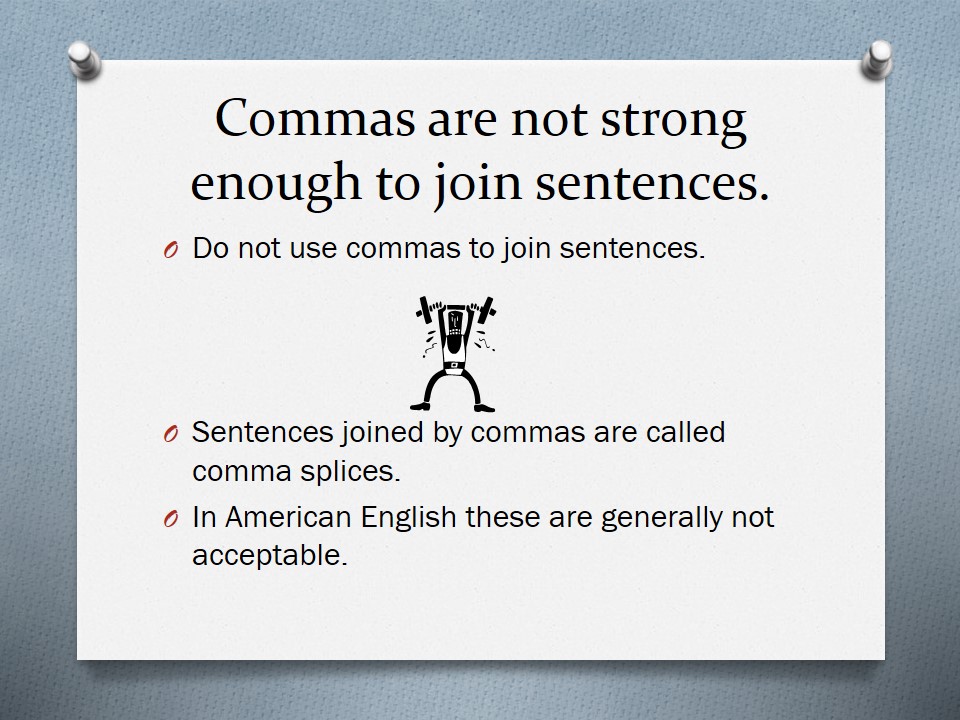 Commas are not strong enough to join sentences.

Do not use commas to join sentences. Sentences joined by commas are called comma splices. In American English these are generally not acceptable.

Set off non-restrictive modifiers and appositives 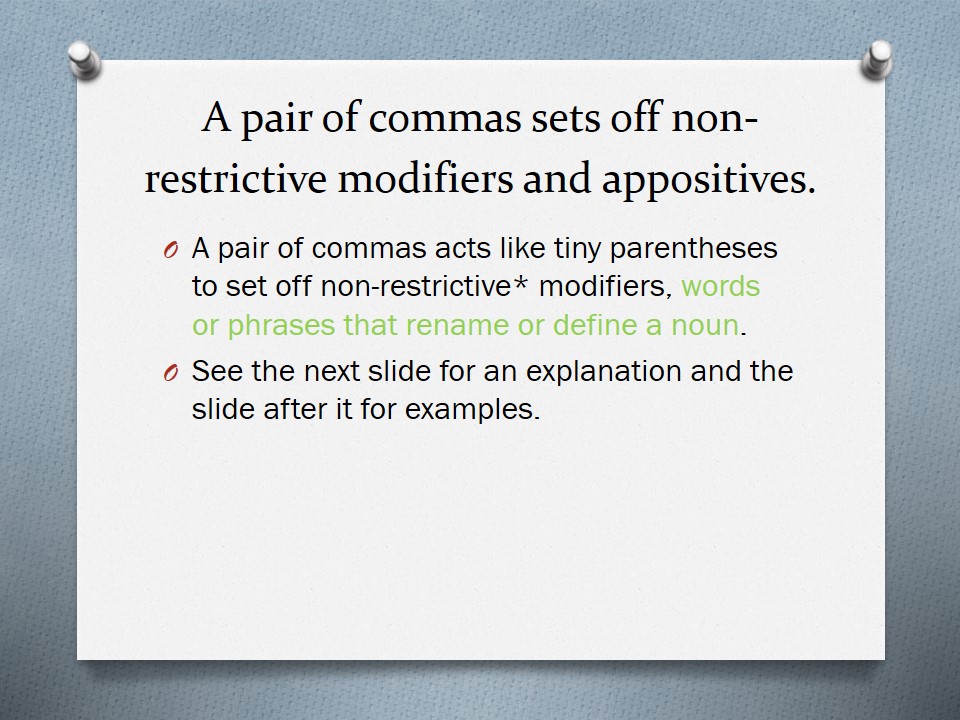 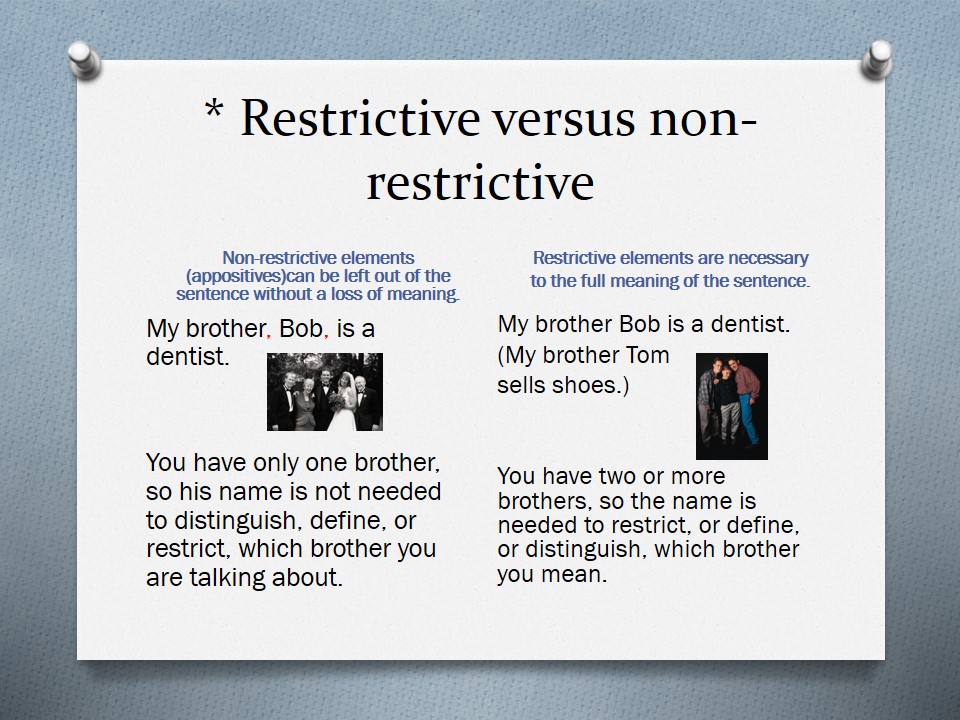 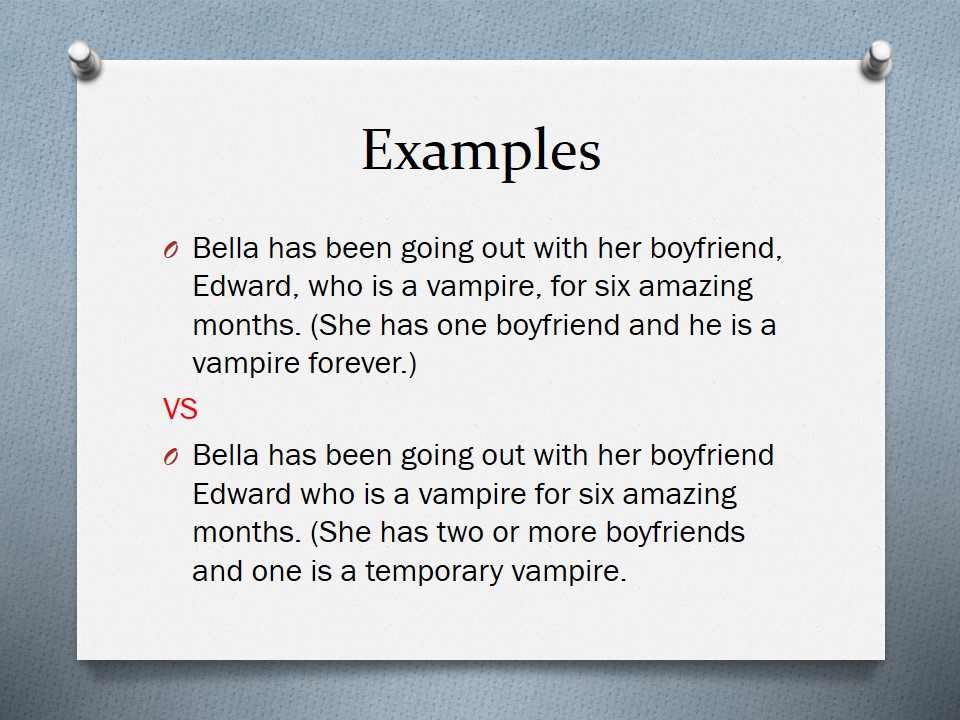 More about setting off non-restrictive modifiers and appositives

A pair of commas sets off non-restrictive modifiers and appositives.

A pair of commas acts like tiny parentheses to set off non-restrictive* modifiers, words or phrases that rename or define a noun.

Restrictive elements are necessary to the full meaning of the sentence.

My brother Bob is a dentist. (My brother Tom sells shoes.)

You have two or more brothers, so the name is needed to restrict, or define, or distinguish, which brother you mean.

Non-restrictive elements (appositives) can be left out of the sentences without a loss of meaning.

My brother, Bob, is a dentist.

You have only one brother, so his name is not needed to distinguish, define, or restrict, which brother you are talking about.

Bella has been going out with her boyfriend, Edward, who is a vampire, for six amazing months.

(She has one boyfriend and he is a vampire forever.)

Bella has been going out with her boyfriend Edward who is a vampire for six amazing months.

(She has two or more boyfriends and one is a temporary vampire.) 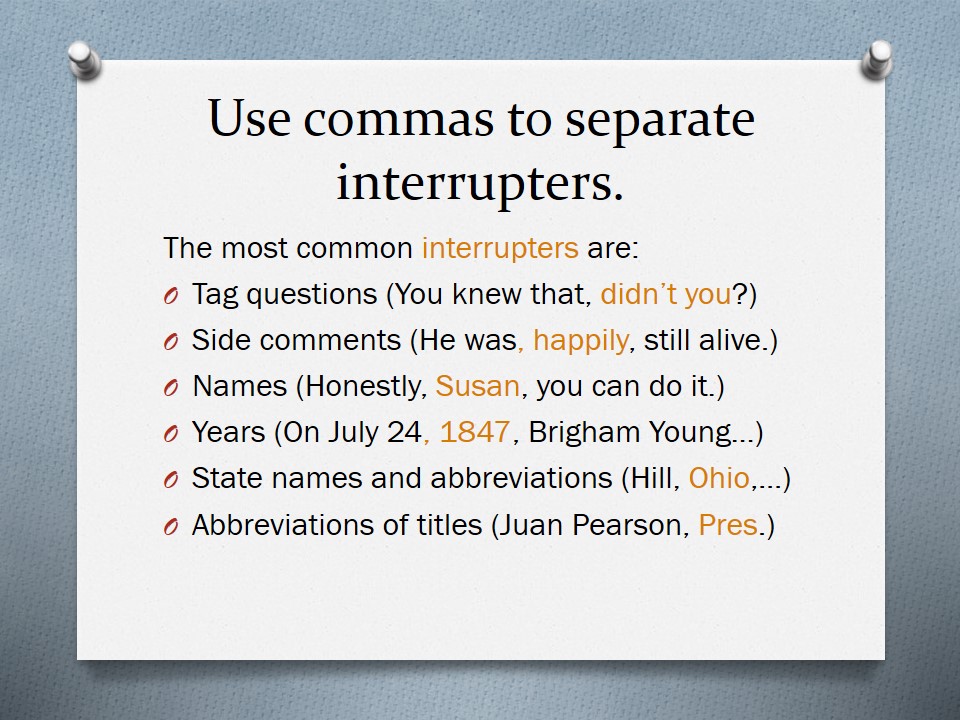 Use commas to separate interrupters.

The most common interrupters are: 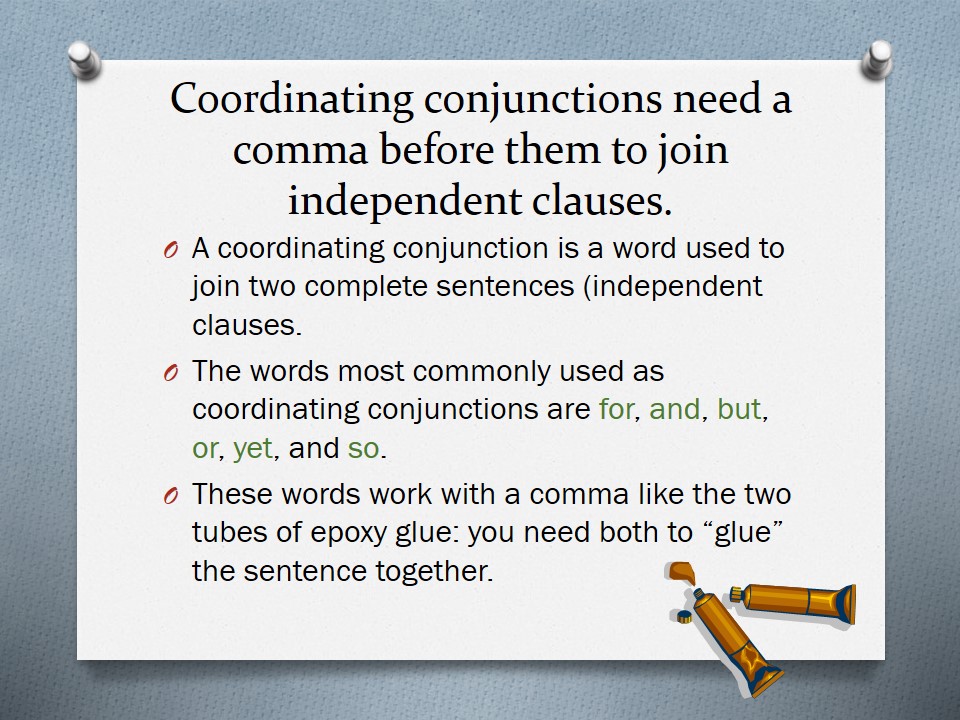 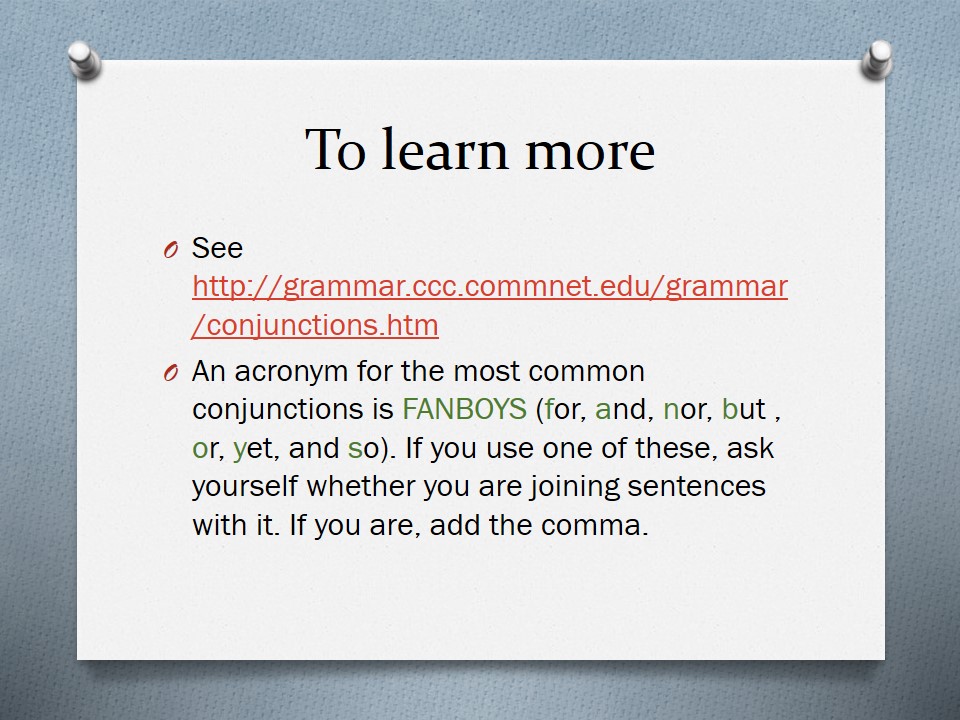 Coordinating conjunctions need a comma before them to join independent clauses.

These words work with a comma like the two tubes of epoxy glue: you need both to "glue" the sentence together. 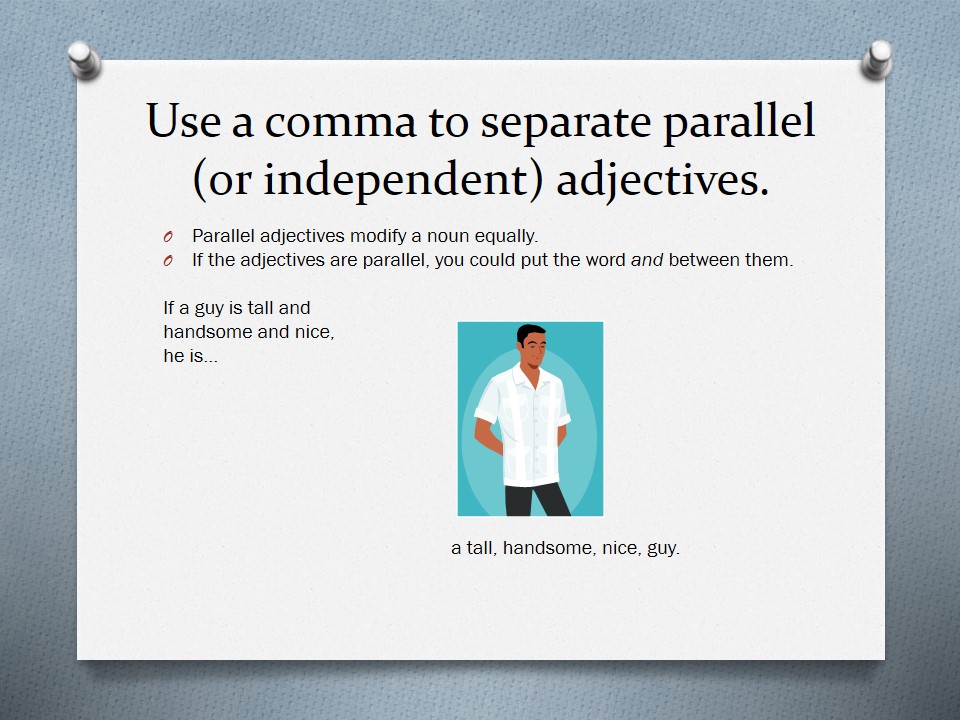 Use a comma to separate parallel (or independent) adjectives.

Parallel adjectives modify a noun equally. If the adjectives are parallel, you could put the word and between them.

If the guy is tall and handsome and fixes computers, then he is . . .

Separate and group items in a series 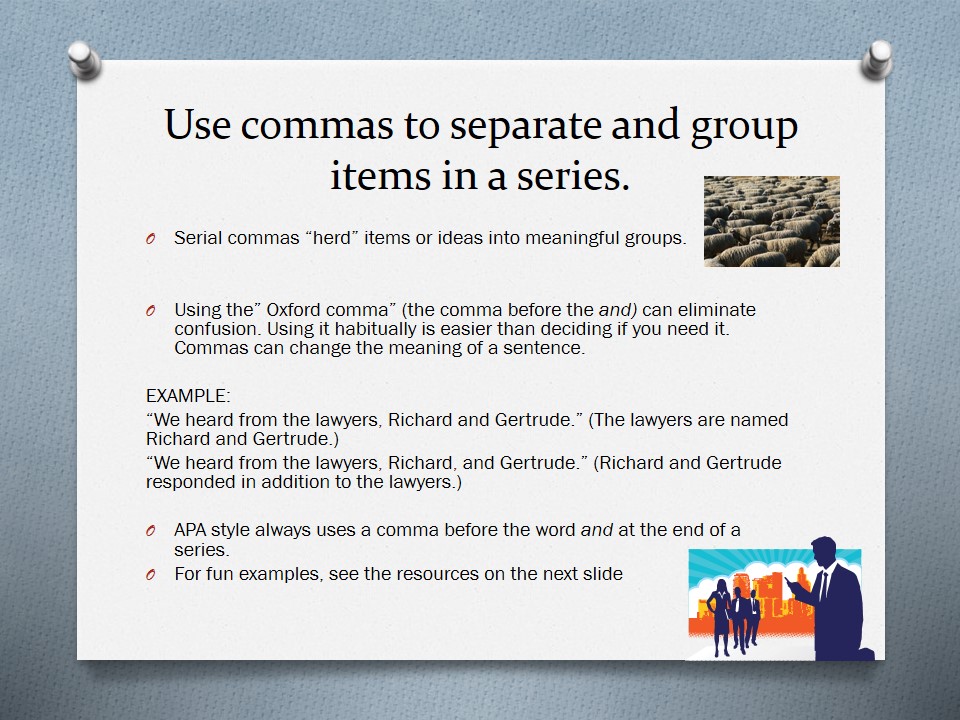 More about separating and grouping items in a series

Use commas to separate and group items in a series.

Using the "Oxford comma" (the comma before the and) can eliminate confusion. Using it habitually is easier than deciding if you need it. APA style always uses a comma before the word and at the end of a series.

Commas can change the meaning of a sentence.

We heard from the lawyers, Richard and Gertrude.

(The lawyers are named Richard and Gertrude.)

We heard from the lawyers, Richard, and Gertrude.

(Richard and Gertrude responded in addition to the lawyers. 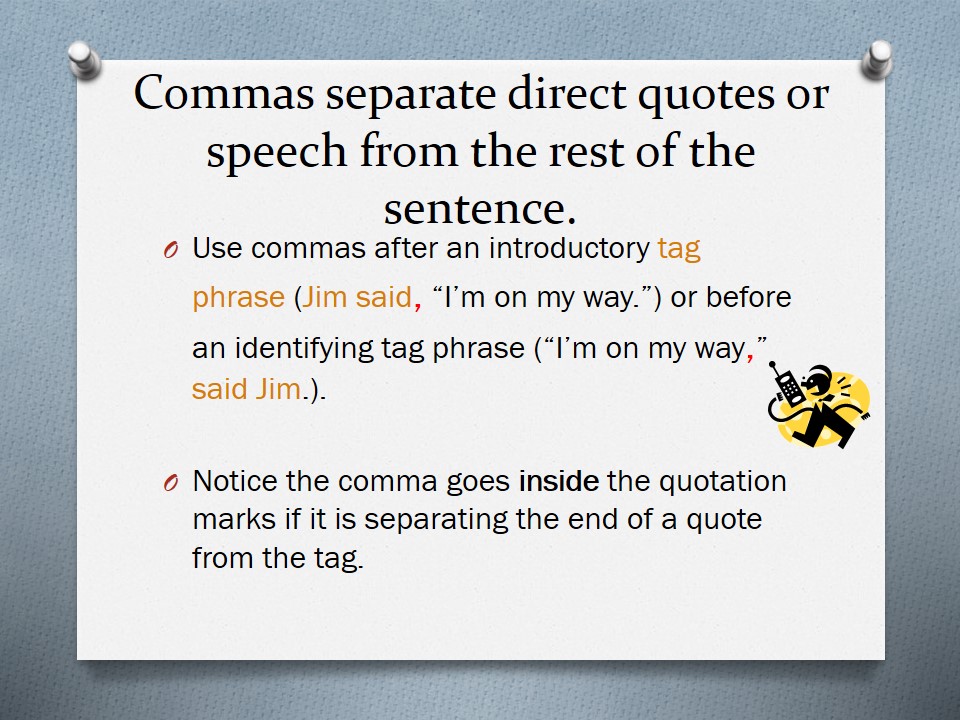 Commas separate direct quotes or speech from the rest of the sentence.

Notice the comma goes inside the quotation marks if it is separating the end of a quote from the tag. 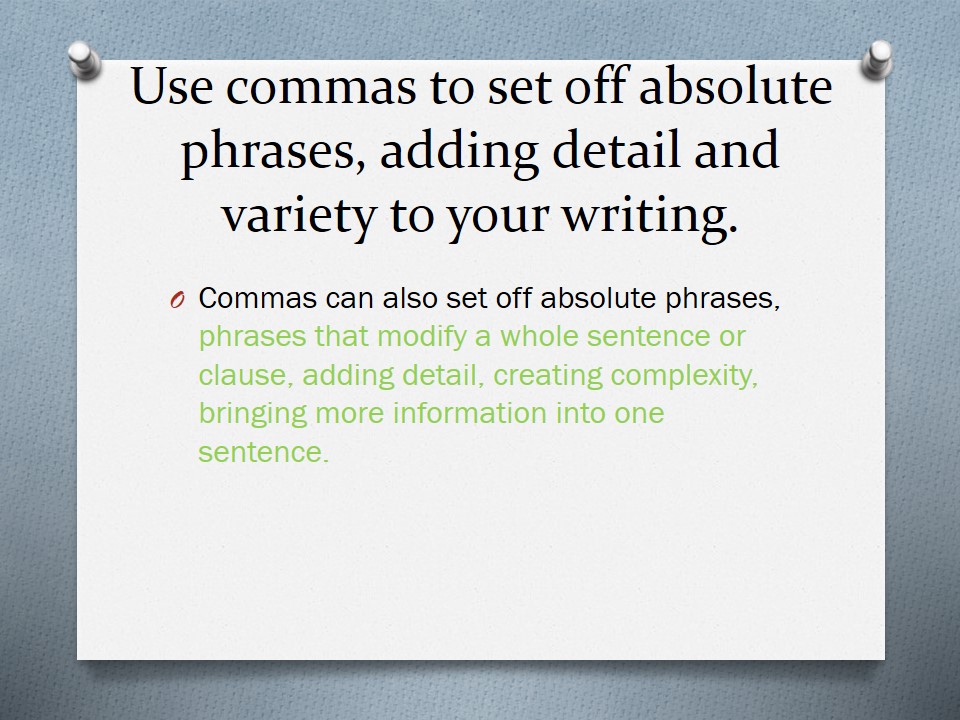 More about setting off absolute phrases

Use commas to set off absolute phrases, adding detail and variety to your writing. 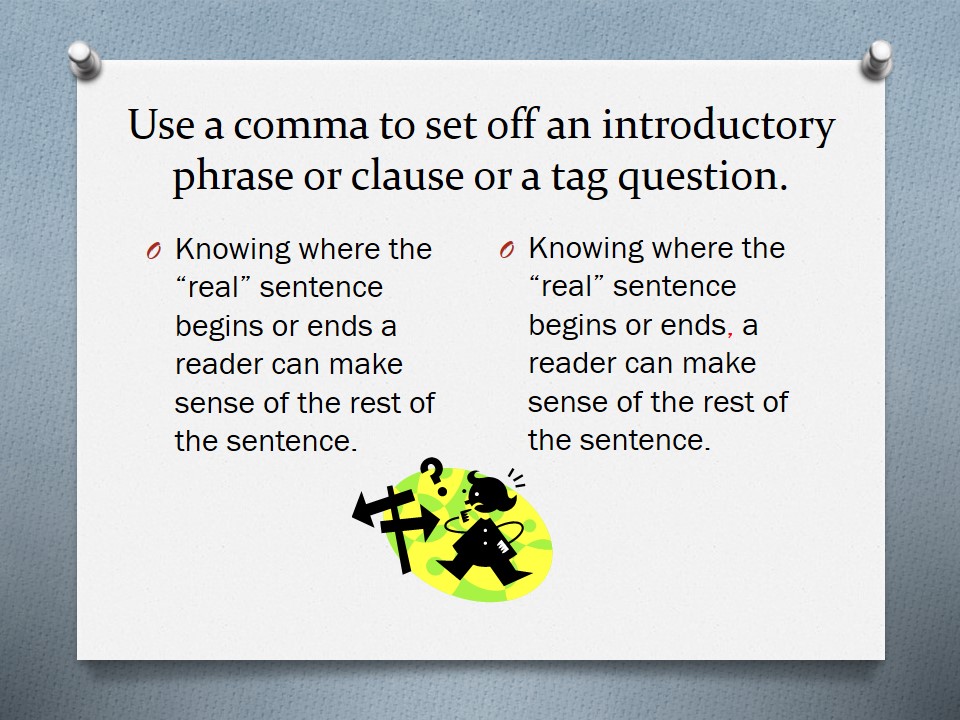 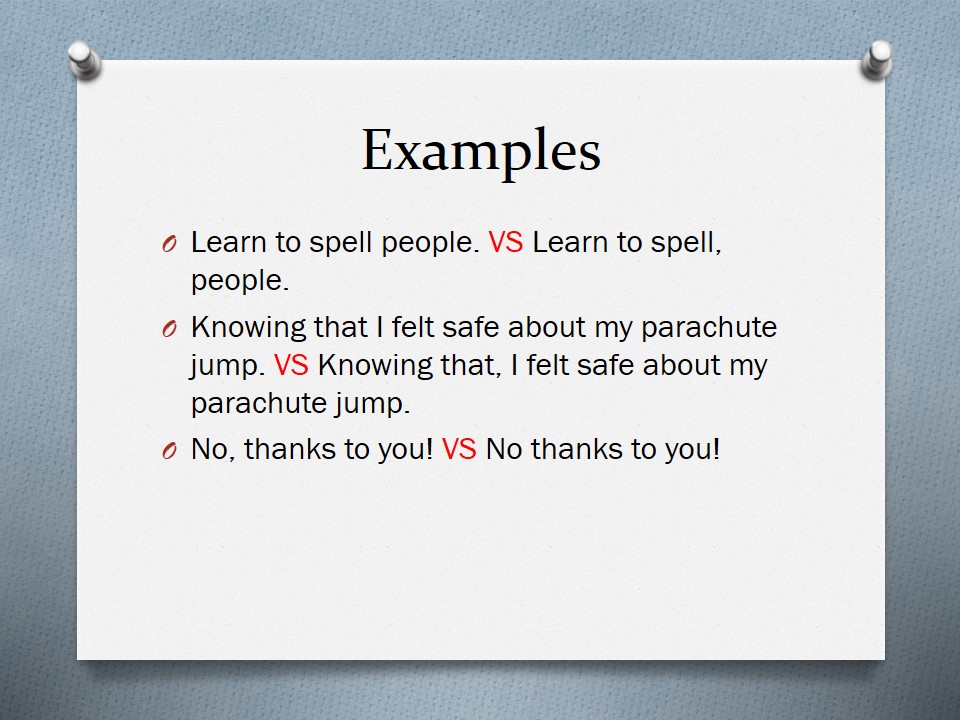 More about setting off introductory phrases

Use a comma to set off an introductory phrase or clause or a tag question.

Knowing where the "real" sentence begins or ends a reader can make sense of the rest of the sentence.

Knowing where the "real" sentence begins or ends, a reader can make sense of the rest of the sentence.

Knowing that I felt safe about my parachute jump.

Knowing that, I felt safe about my parachute jump.

No, thanks to you!

No thanks to you!